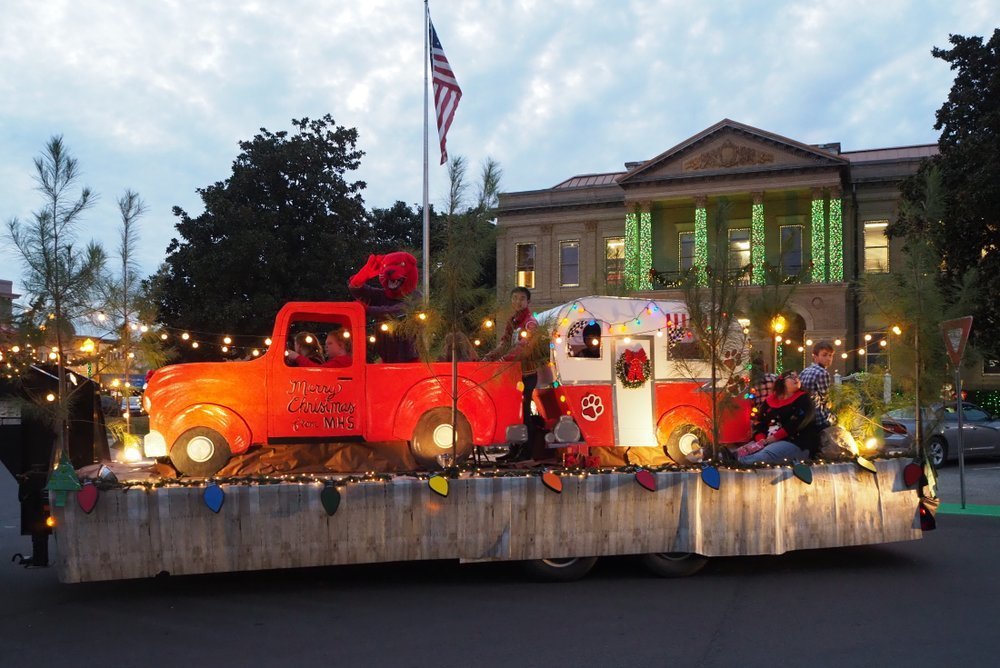 Magnolia-Columbia County Chamber of Commerce Christmas Parade took place Thursday evening. The procession began at 5 p.m. at the southeast corner of the square, at the intersection of Calhoun and Washington. The parade moved counter-clockwise around the square then briefly onto E. Main Street, before turning left onto N. Jackson.

It was filled with floats and entries from numerous local organizations and businesses. Magnolia High School Arts, with its brilliantly decorated and antique Christmas farm vibe, capped off with Paw-Paw dressed in a flannel shirt, was the overall grand prize winning float. The organization was awarded $500, and the category was sponsored by Greg Rich & Associates.

Sam Biley, a former Mulerider men’s and women’s basketball coach, along with his daughter Bridgette Biley-Olatunji, and son-in-law Christ Olatunji, switched on the massive tree and surrounding lights nestled in front of Overstreet Hall for the first time. The tree was donated by the Hunter family of Manchester, Ark. The family's daughter, Alexandria Hunter, is a senior at SAU.

"We've been blessed with having these trees from the Hunter family for about four years now," said Dr. Trey Berry, president of Southern Arkansas University, during his address.

The SAU Bell Tower was lit immediately following the Overstreet lighting. The lighting was followed by a shower of fireworks.

The full slate of parade winners were announced on the night as well. Micki Mitchel, director of the Magnolia-Columbia County Chamber of Commerce, read the float category champs and runners-up. They were: