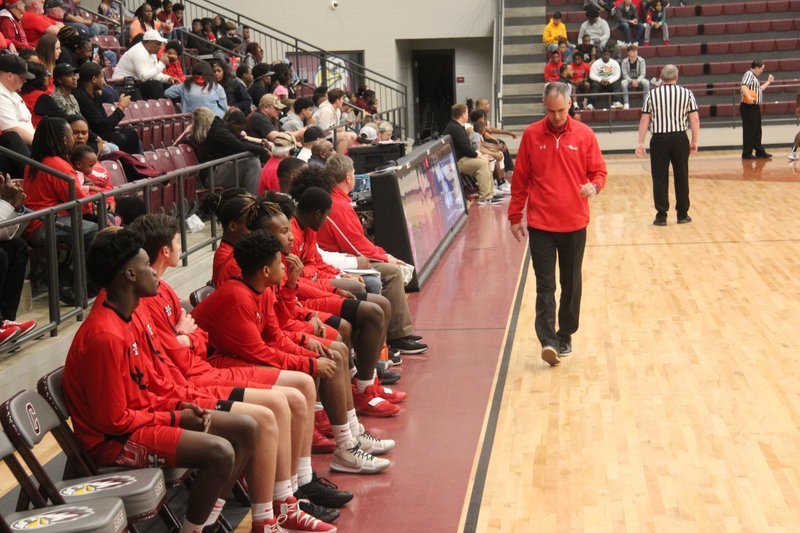 Magnolia continued to show why it is the No. 1-ranked team in Class 4A by blowing past Crossett 72-39 Tuesday night.

The unbeaten Panthers (16-0, 7-0) are a half game ahead of Monticello (17-5, 7-1) in the 4A-8 Conference standings and will face the Billies on their home court Friday night. Magnolia won by 32 points when the two teams met last month, but Monticello hasn’t lost since.

The Panthers will look to slow down Shannon Strickland, who had 21 points, 11 rebounds and 7 assists during a Monticello victory last week.

At Crossett, where the Class 4A South Region Tournament will be held in two weeks, Magnolia raced out to a 19-2 lead during the first six minutes and led 21-4 after one period. The run saw five different Panthers score, with Derrian Ford getting a slam and Devonte Walker knocking down a 3-pointer.

Ben Lindsey started five sophomores in the second period and the Panthers went up 38-13 before heading to the locker room with a 45-19 lead. The sophomores played much of the third quarter and helped the Panthers lead 63-31 at the buzzer.

“The pace was more to our liking,” said Lindsey, referring to a 24-16 victory over Warren last week where the Lumberjacks literally held the ball for most of the game.

“When Devonte is making some outside shots, that helps open the floor up for everyone else,” said the coach. The sophomore Walker finished with 11 points, but Magnolia was led by his classmates Ford and Colby Garland with 21 points apiece.

Lindsey said it was on purpose to have sophomores D. Walker, Ford, Garland, Adrian Walker and Deraylen Williams on the court at the same time.

“I wanted to see how those kids play together with each other and get a sneak glimpse of what the future will look like,” he added.

The coach said Ford and Garland had excellent games, and could explode on any given night. He added that seniors Kyle Carver and Braelyn Beasley don’t always get the same publicity as the others, but noted that Magnolia wouldn’t be where it is right now without them.

In girl’s action at Crossett, the Lady Panthers jumped out to a 9-0 lead enroute to 48-35 victory over the Lady Eagles.

Against Crossett, Donnell Ford’s Lady Panthers led 12-4 after one period and 25-17 at half-time. Three-pointers by Kelcy Lamkin and Jadda Purifoy helped Magnolia outscore Crossett 11-1 in the third period.

The Lady Panthers led by as much as 24 points in the fourth quarter, but Crossett closed the game on an 11-0 run.

“We are trying to control the scenarios we can control, which means win the games we should win,” Ford said while talking about being one of the top four teams to reach the regional tournament.

“We now have the tie-breaker over Crossett and must get ready for the next step,” he said.

Against Crossett, Lamkin led in scoring with 13 and Kiara Frazier added 10. Satiya Rone had eight, Keshunti Brantley 7 and Jadda Purifoy 6.

The Monticello Lady Billies (0-20, 0-8), Magnolia’s next opponent, is winless in conference and overall.